“I want to be world famous! And sing on stage in New York!”

Janaya was always a star. She lit up the room, livened any gathering and always had everyone cracking up with her jokes. It was only natural for her to want to showcase that on a grand scale! On the bucket list it went, and the research began.

New York ain’t cheap! With a staggering list of experiences to be had, it was the only thing we hesitated on, next to Japan. We had always talked about going there but with a much shorter time period to cram everything in, it became the battle of “what can we actually do?”. The worst thing you can ever ask a mother to do is plan a life for your child in 9 months. I am a stubborn woman who sets her mind to something and will deliver, one way or another.

Brett Kissel had helped with her ‘world famous’ dream. Soon we would see what a handful of truly amazing people would do to make her ‘singing on stage’ dream a reality as well.

A friend of mine had reached out and came up with an amazing idea to help Janaya with part of her wish. The church she goes to, North Point, has a really good band that would be honoured to have Janaya on stage with them! At first, Janaya was hesitant as her self confidence had plummeted through the floor boards with the drastic weight gain. She did not want to be the centre of attention, she did not want anyone to look at her… She needed some time to think.

Ten days had passed as we were hoping to have had Janaya weened off of the steroids completely and in better spirits. The facial swelling severely affected her ability to sing and exhaustion ruled her world, depleting the energy she would normally have had ample of to perform. My friend had reached out again to check in as they had a date set for this to happen and it was fast approaching, so if it was a go there would need to be time for preparations. I mentioned it to Janaya again and, with a moment of hesitation, she happily accepted and set to work right away to plan her songs! May 1, 2018 was set to be a truly amazing day already!

Preparations were under way with Janaya’s nod of approval. The next day, we had a tentative plan! It would go as follows:

6pm: Limo shows up at our house to take us to the event

This was set up already to be an amazing event and we were so excited! We had hair and makeup planned, outfits picked and songs practiced. This was happening! And so the wait began…

May 1 came in the blink of an eye. We woke up, spent a few hours practicing her entrance, dance moves and signature then at 2pm, the fun began! We needed a little extra time for hair as Janaya needed a haircut due to fall out from radiation treatment. She picked her style, a classic curly faux hawk up do, and off to work Shea went! Shea had done Janaya’s hair for Brett Kissel and, naturally with a talent she has, she became our regular hair lady/dear friend.

The songs she decided to sing were “Angel” by Theory of a Deadman, “Everything is Alright” by Glorious Sons and “Fight Song” by Rachel Platter. The band would be playing one song to kick it off then in between each song Janaya sings, they will play another to give her a break. “Come Together” by The Beatles, “Sunshine of Your Love” by Cream and “Them Kids” by Sam Roberts were their picks! Definite crowd pleasers.

Hair was phenomenal, highlighter was applied to her beautiful cheeks with a touch of lipgloss and the wait for the limo began! She played on her iPad a bit and decided on a small snack. She was so excited this was happening that she didn’t want to over stuff and affect her performance. She’s such a drama queen haha! Janaya didn’t want to be up on stage alone so my childhood best friend, Katie, who had helped her practice, offered to be up on stage to back up sing. This definitely settled her nerves a bit, as I also assured her that I would be right there for her as well.

Limo pulled up 10 minutes before 6 and got us loaded up and we headed out. The limo had beverages and some candy for us to snack on, but the adrenaline coursing through our veins prevented us from snacking much.

Arriving at the Church, Janaya was a nervous wreck and couldn’t believe the crowd that had formed for her! I calmed her down as best I could, reminding her that she is an incredible soul and all the people were there for her and only her. Oh man, did they ever pull out all the stops! Red carpet and a star of fame greeted us among the crowd and media that had gathered as we got out of the limo and the cheers erupted! Janaya became a little shy at first but warmed up to the crowd and waved to her fans.

Walking into the building, it was definitely set up for a grand event! An autograph booth emblazoned with balloons and the stage was set for a star performance. We were escorted to a ‘makeup room’ to prepare for the upcoming event, where family gathered together and Janaya relaxed before her star debut.

Finally, the time had come. The moment she had been practicing restlessly for for the last two weeks. The audience was seated and our escort had arrived to take us to the stage. She looked nervous and it was hard to gauge how this was going to go with her still feeling self conscious but regardless, it was going to be amazing. We walked into the auditorium and the room erupted in cheers as Jay, Janaya and I made our way in between the bleachers towards the stage. Candles lit our way as the red carpet turned into low, candle lit steps onto the main stage. We waited at the bottom of the steps for our cue as the band started performing the first song, leading up to Janaya’s introduction..

I gestured to where she needed to stand, as she nervously edged her way on stage and into position with Katie by her side. Jay and I got settled at the front of the stage where she could still see us. The lights dimmed, an ambient purple glow appeared behind the stage as the melody began. Janaya started settling in after a quick shuffle for a stool happened. She glanced around the room, the anxiety started building as she stared out into the vast crowd, all the senses flaring at once. The cheers, the people, the spotlights.. I could see a fast train of fear hitting her. I seen her lip quiver before the unmistakable words formed on her lips…

Within seconds, I was up on stage with her.

“Look at me Janaya, don’t look at them” I instruct her as I envelope her face between my hands, gently nudging her gaze towards mine and away from the exuberant crowd.

I will be completely honest with you. I don’t remember much of the event outside of Janaya… I could hear the cheers, I could hear the music, but all I could see was her. Her tears begin to form as she shakes her head saying she can’t do this. My heart aching to take away her fears as I pleaded with her to just look at me… “Look at my eyes Janaya, it is just me and you babe. We are at home practicing, forget everything else”. She held my arms, took a deep breath and began to sing as I held the mic and sang along with her. I had never sung for a crowd before, though my family tells me I should… My nerves were trying to crash through the wall of motherhood desperate to bring Janaya’s fears to rest and the internal war I faced was tormenting. None of that mattered. Janaya mattered. Janaya matters…

I had called for some family to come up on stage to support her and surround her with familiarity. Janaya’s vision problems made it impossible for her to make out faces in the crowd, so maybe if they were right next to her she could relax a little… Up came my niece, my younger sister, and one of Janaya’s best friends. You could see her visibly relaxing. “Just look at us Janaya.. focus on us”. 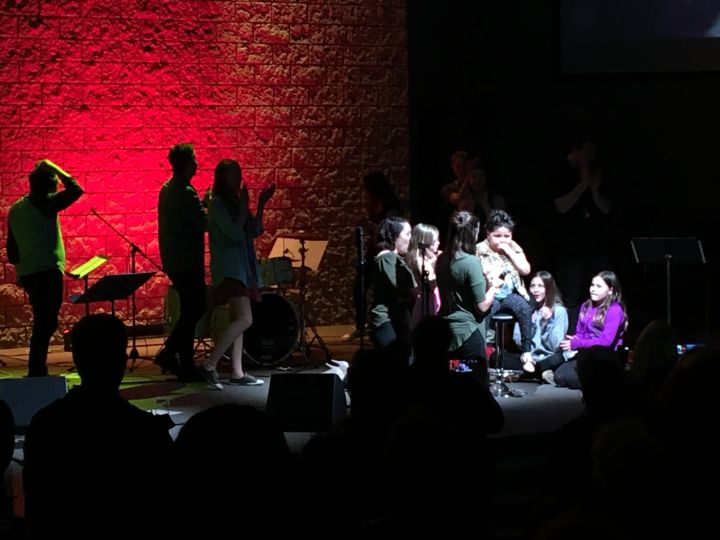 Song after song played and I was in auto mode. Get her through this Amanda, she needs you. She needs this. Give her the strength she needs to endure. And endure she did. The final melody hit it’s finishing notes as the room erupted in cheers, whistles and encores. Finally, you could see Janaya’s smile beam as she looked around, half relieved it was over and half wanting more. The crowd bellowed for an encore, and finally Janaya seemed ready to give them a show! What song does she request? “Gummy Bear” of course! The band bounced around the stage as Gummy Bear raged through the speakers, children joining the dance party and finally you could see Janaya let loose as the focus wasn’t entirely on her.

The music started to wind down as Janaya was praised and relieved from the stage. Immediate family and friends followed myself and Janaya off stage and towards the dressing room to wind down and decompress after such an amazing experience. It wasn’t quite over yet, as what would be Janaya’s favourite part of the whole night was about to commence… Autographs!

We left the dressing room and headed towards the autograph booth, lined with dazzling streamers and gold star balloons. There was Hollywood decor and a black table cloth covering a table strewn with photos of Janaya waiting to be autographed. She didn’t waste any time and got right to signing for her fans! A lineup started to form, but out of the corner of her eye Janaya seen someone she was eager to meet walking towards her.. the Mother of Dragons, Daenarys! She couldn’t believe her eyes, hopped up from her chair and hugged her so tightly. This day just kept getting better and better!

She signed autographs, met tons of fans, took lots of photos and even signed some custom Janaya’s Journey sweaters that we tossed out to the crowd! Janaya was definitely in her prime at that table, she soaked up every ounce of love she received in those moments.

As the crowd began to dwindle and sunshine began to fade, Janaya’s yawns of exhaustion were my cue to wrap up this amazing event. We said our final goodbyes, thank you’s and made our way home. Hair was undone, makeup wiped off, pajamas on and cuddles commenced, my favourite time of the day. This was truly a night we would never forget, and we are so thankful for the opportunity provided to Janaya. It wasn’t New York, but nothing could have topped the experience we had that day!

Special thanks to Vashti, Bob, Trevor, Daenarys, The Drew Derkson Band, North Pointe Church and all the amazing fans who came out to cheer Janaya on. As always, thank you to my family and friends for being a constant support for Janaya and myself.